Boosting a long history and an incredible popularity, Halloween is probably one of the most complex holidays celebrated in Great Britain, Ireland, United States, Australia and New Zeeland. Dating back from antiquity, Halloween has acquired new traditions along time and has been constantly “polished” to meet contemporary demands. Among the best known Halloween traditions it is imperative to mention costuming, trick-or-treat, pumpkin carving and house decoration. These, as well as other traditions and myths will be detailed below.

The origins of the Halloween costumes seem to be as old as the holiday itself. During the Samhain festival (a holiday which is believed to be Halloween’s “ancestor”) people wore animal skin to cover their bodies and faces with the belief that this disguise will keep the evil spirits away. Furthermore, there were reports stating that during the festival men wore female clothing, while women were dressed up as men to protect themselves from the dead spirits’ spells and curses. The costume tradition was also present during the Roman period, when Samhain became a Christian holiday under the name of All Saints Eve. However, the animal skins and pagan outfits were replaced by costumes with religious theme. People dressed in saints, devils and angels to celebrate the spirits of the dead and the saintly figures.

While most people agree on this version, there are also historians claiming that the evidence backing this first story are rather insufficient. According to them the costuming tradition was born at the beginning of 20th century, when children start wondering from door to door for sweet treats and candies. Costumes were used to cover up children’s identity in case they started doing “mischiefs”. The first accounts of costuming tradition for both children and adults in the United States was in the early 1900s, while in the 1930s it was reported the first mass production of Halloween costumes. 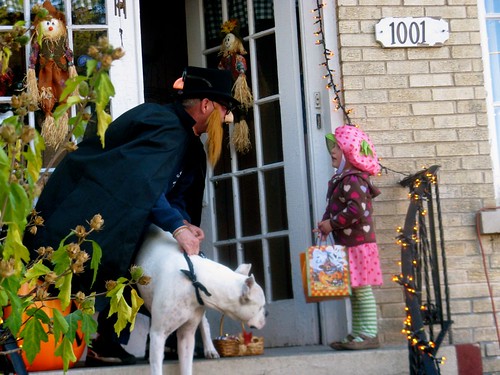 Trick-or-treat tradition is strongly interconnected with Halloween’s history. An ancient version of the trick-or-treating can be traced back in the Celtic period when people left food and wine for the spirits, in order to “tame” them and avoid falling prey to their anger. When Christians have taken over the former Celtic population, priests have encouraged people to serve the poor “soul cakes” in exchange of prayers for the deceased’s souls instead of leaving food on the door step. The poor would go from house to house in a ritual called “going a-souling” and asked for cakes and food, while promising that they will pray for the souls of the ones who died recently. The “a-souling” was rapidly embraced by children and combined with the myth of the wandering fairies, gave birth to the modern “trick-or-treat”. The myth said that on the last day of October, fairies wandered dressed as beggars from door to door to ask for food. Those who refused to serve the fairies had to deal with their spells and curses. Supposedly, this is the origin of the “trick” part of the “trick-or-treat” tradition.

Celts used carved turnips or potatoes and place a coal inside to lighten their way home back from Samhain celebration. The coal was lighten up from of the bonfire and taken to people’s houses to keep the evil spirits away. This pagan tradition was preserved during All Hollow’s Eve and gradually people started to leave the turnips on the doorsteps to guide spirits’ way. The pilgrims celebrating Halloween lacked turnips, but soon discovered that pumpkins were larger and easier to carve than turnips and started using them as support for the coal.

The carved pumpkins are also known under the name of Jack-o-Lanterns after an Irish man called Stingy Jack. The legend says that Stingy Jack tricked the devil and managed to make him promise that he will not be received in Hell after his death. However, Jack was a man of bad reputation, so the gates of Heaven were also closed for him, leaving him trapped in between. He is said to wander as a ghost on the night of Halloween, trying to find his place. People leave carved pumpkins at their doorsteps to guide his way.

Apple-related traditions were most probably inherited from the Roman pagan festival which celebrated Goddess Pomona, the fruit and trees goddess, whose symbol was an apple. Pomona festival was held at the end of October and its superstitions were added to the Celtic Samhain.

Apple bobbing – Single men and women were encouraged to take part in a competition which involved catching apples that were floating in a water barrel with their teeth. The first to catch an apple was thought to be the next to be wed.

Apple peel – at Halloween people used to peel an apple and interpret their life expectancy according to the peel’s length. The longer the apple peel, the longer the life span.

Apple peeling in front of a lit candle – reserved to unmarried young women, this ritual was performed on Halloween night. It was believed that they would see their future husband’s face in the apple peel.

Costumed parties one of people’s favorite way to spend the Halloween night. These happy gatherings originate in the antique bonfire gatherings when the Celts danced around the bonfires dressed up in animal skins.

Ghost stories, similar to many of the modern Halloween traditions, are related to the Samhain festival and to the Celtic beliefs that in the last day of October the dead arise from their tombs and wander the world, casting spells, spreading diseases, killing cattle and damaging crops.

Witches are now an usual, we may even say indispensable, appearance for Halloween. Whether there are sexy witches trying to tempt you with their appeasing looks or horrifying creatures decorating those dark corners of the houses, witches are part of Halloween just as much as costumes and Jack-o-Lanterns. Their history starts more recently, however, in the Middle Ages when priests started scarify single women who supposedly practiced sorcery. The stereotypical image of the witch wearing a black pointed hat, torn black clothing and stirring in her boiling cauldron is inspired by the ancient “crone”, a Celtic goddess honored during the Samhain festivities. The “crone” was an old person, symbolizing change and the turning of the season, but also wisdom and balance. She was also confounded with “Earth mother” and her boiling cauldron was considered the place where all souls will go after death. The stirring movement was a metaphor of reincarnation.

The brooms which are now traditionally part of the witch costume have their roots in medieval realties. The women convicted of sorcery were usually very poor, so they could not afford a horse to carry them, so they travelled on foot, through the woods following the shortest way to the destination. They used sticks or brooms for support and defense during their journeys.

The bonfires attracted many insects, a reason of celebration for the wandering bats looking for food. Therefore bats were a constant presence for Samhain and later on for Halloween bonfires, leading to their permanent inclusion in the holiday’s profile. It was believed that if a bat surrounded a house 3 times, somebody from that house would die in the near future. Another legend said that if the bats entered inside a house for Halloween, then that house was haunted. Furthermore, bats were thought to partake witchcraft rituals and were largely feared.

Spiders and spider cobs are another highly popular Halloween motif, so the superstitions related to these arachnoids have not failed to make their appearance. There was a superstition according to which a spider which accidentally falls in a candle-lit lamp and it is burned by the flame indicates that witches are near, while spiders seen on Halloween meant that the soul of your deceased friend/relative is watching over you.

Halloween’s traditions, myths, superstitions and legends make it a one of a kind holiday that can be enjoyed by a large variety of people, from children to adults, from poor to rich and from religious to atheists. Its charm rests in the mixture of mundane and supernatural and in its incredible power of erasing all types of boundaries.